Have you been dreaming of an overdue escape to a Meditteranean Greek island with white-washed villages, stunning sunsets, beautiful resorts, and incredible cuisine? Greece is famous for many things. Its impressive architecture, remarkable statues, and gigantic pillars carved with intricate designs have certainly left an impression on everyone who has visited this country. And we do owe it to Greece for almost every advancement in culture, literature, art, and history. But you won’t find one of Greece’s greatest national treasures in a museum, art gallery, or beach club. Instead, you will find it right on your plate.

Greek cuisine is one of the finest, tastiest, and most unique in the world. Unfortunately, understanding traditional Greek cuisine can seem overwhelming. Authentic cuisine is regional, seasonal, and exceptionally nuanced.

Often, the menus at the charming little restaurants, perched on craggy cliffs, in fishing villages bear little resemblance to the dishes served at American-Greek restaurants or portrayed in movies like “My Big Fat Greek Wedding.”

Since ancient times, the Greeks understood the principles of agriculture and nutrition. As a result, Greek diets revolve around Mediterranean ingredients, rich traditional recipes, and diverse cultural influences. Ancient recipes were passed down from generation to generation and new methods, ingredients, and cooking styles melded with traditional ones. To help you understand Greek cuisine, we’ve compiled a list of all the Greek food you need to try and everything you need to know about eating in Greece. 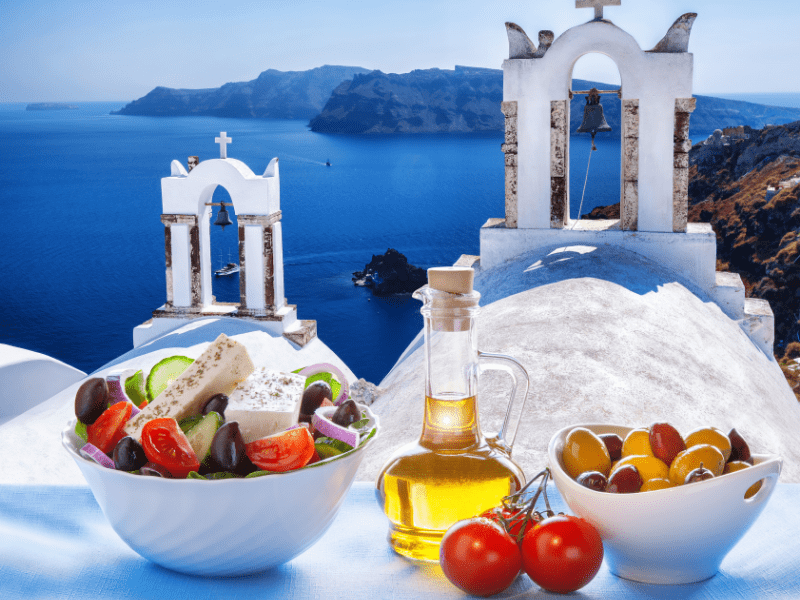 Influenced by centuries of occupation and trade with neighboring countries from the East and West, traditional Greek cuisine features a distinct variety of tastes. Most dishes incorporate fresh, leafy vegetables and cured meat. In ancient Greece, the most common trio of ingredients found on the dinner tables were figs, olives, and bread. Although these ingredients still infuse many dishes, advancement in farming, trade, and access to a wider variety of spices, meats, and dairy products greatly enhanced traditional cuisine. Nuts, beans, oils, legumes, fruits, vegetables, cheese, and butter are abundant. Greek chefs also adapted Italy’s love of garlic. Many dishes utilize garlic mixed with thyme, oregano, mint, basil, dill, parsley, and more.

Coastal regions take advantage of their access to the sea to prepare exquisite seafood dishes. While lamb, goat, and pork receive copious amounts of attention inland.

Although it would be impossible to cover the diversity of Greek cuisine in one article, we compiled a list of our favorite Greek specialties. 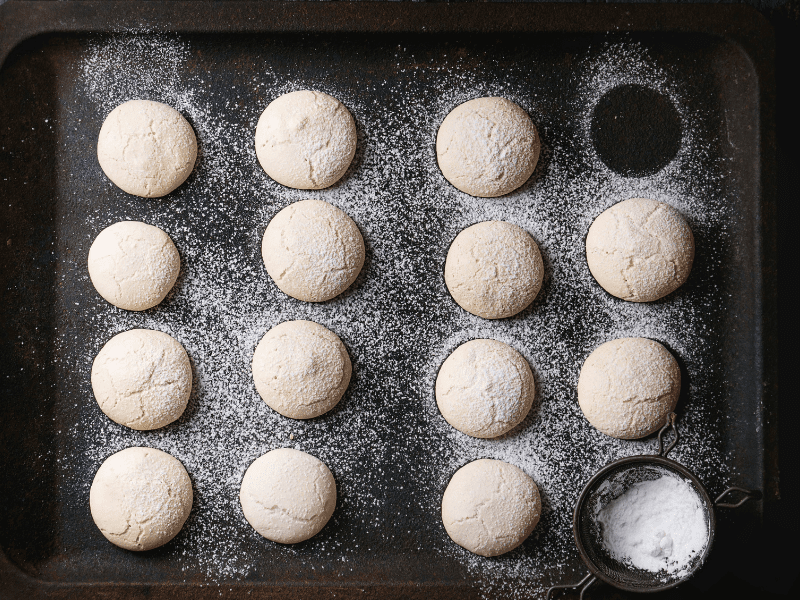 The Amygdalota means “(a) sweet (taken) from almonds,” and this almond treat is a naturally gluten-free cookie. It’s interesting to note that the idea that cookie dough tastes better than the cookie goes back centuries. Now baked in various forms, the sweet cookie was initially served unbaked as a mixture of sugar, flour, almonds, and water.

Can you picture ancient Greeks serving raw cookie dough at a neighborhood party or children sneaking morsels of the tasty dough when their mothers were not looking?

But, don’t worry, this traditional Greek cuisine confection is now available in almost every city, baked to perfection. 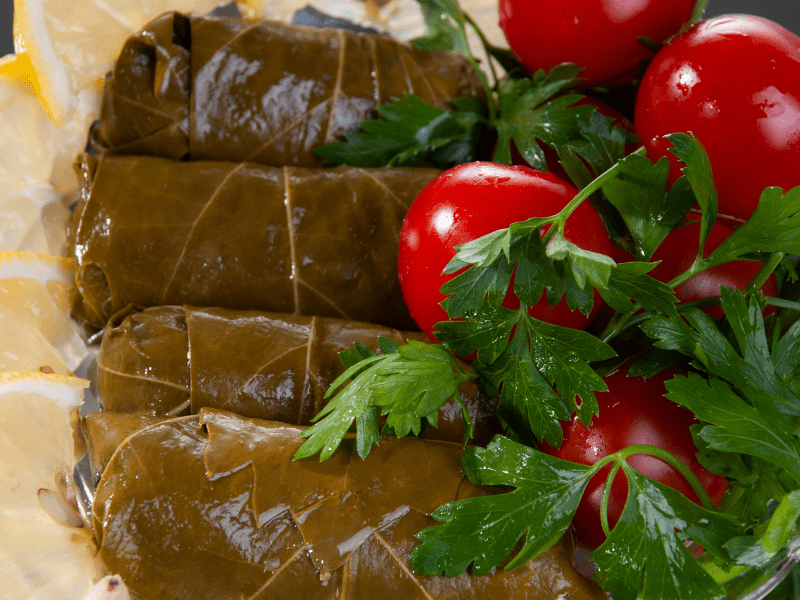 Driven from the Turkish word dolma, meaning filling, Dolmadakia is a savory street food made of ground beef or lamb mixed with rice and rolled up in grape leaves. If you think about it, this is probably where the burrito gets its origins. However, the recipe of traditional Dolmadakia originates from Turkish cuisine. Depending on available ingredients and seasonality, different varieties of Dolmades emerged. 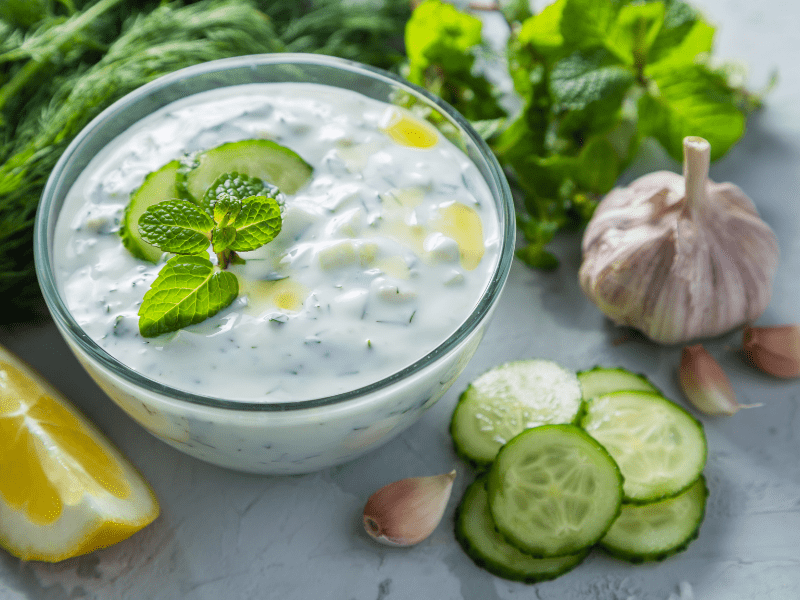 It turns out the Greeks really were ahead of time! Tzatziki is a traditional dip made from strained yogurt, dill, garlic, olive oil, and salt. Generations of Greeks used it as an appetizer with their fried food.

Depending on who you ask, Tzatziki is either a modification of the Turkish dip, the Cacik, or an original Greek recipe.

To give a bit of historical context, The Ottoman Empire ruled over Greece from the mid-15th century until the Greek War of Independence in 1821. During this period, all Greek foods received Turkish names. Therefore, many Greek dishes still retain Turkish nomenclature. But while disputes about the origin may continue for a few more centuries, the undeniably delicious taste of this delectable sauce brings everyone to the same table. 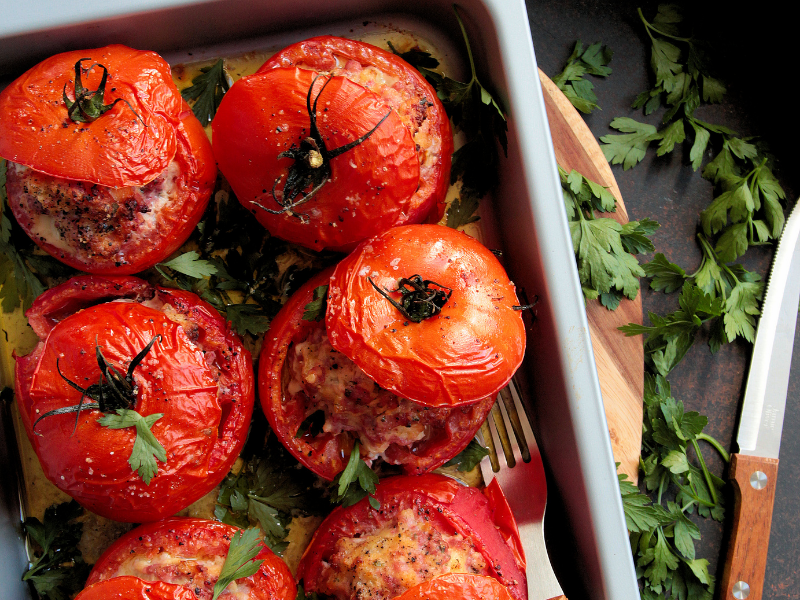 Hearty, delicious, and bursting with vibrant flavors, Gemista is a stuffing mixture of ground meat, spices, and herbs, all precisely packed inside a tomato. The traditional Greek cuisine recipe for Gemista falls under the category of dishes called “Ladera.” These dishes are prepared with olive oil. A generous drizzle of extra virgin olive oil helps this stuffed delicacy tenderly bake to delicious perfection.

While traditional Gemista calls for tomatoes, many restaurants serve the same filling stuffed in peppers and served with a side of feta cheese. 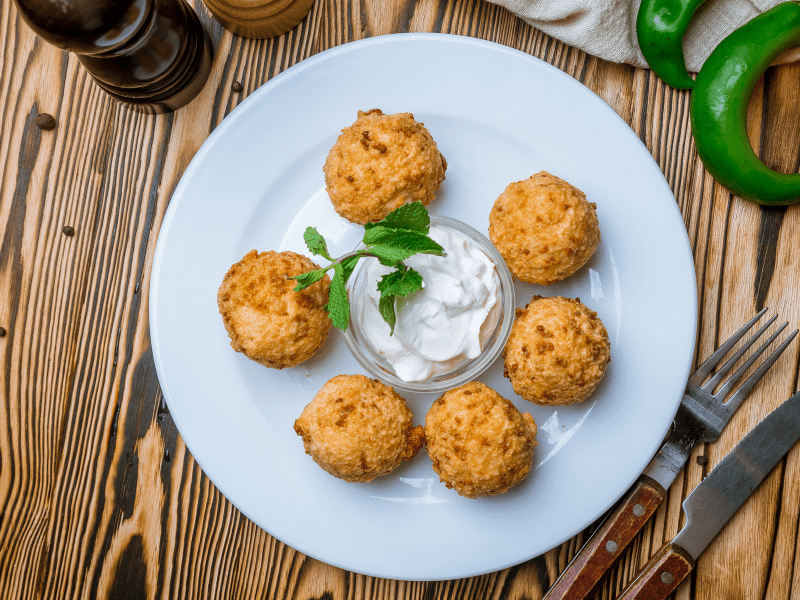 Zucchini (courgettes) are the star ingredient in Kolokythokeftedes. Infused with flavorful mint, dill, salt, and other local spices, the Kolokythokeftedes come in two forms: balls and patties. Either way, the dish is a fast-selling appetizer dully found at high-end restaurants and in any Greek taverna during summer. Paired with the cool Tzatziki, yogurt, or feta, the Kolokythokeftedes is a finger-licking delight. 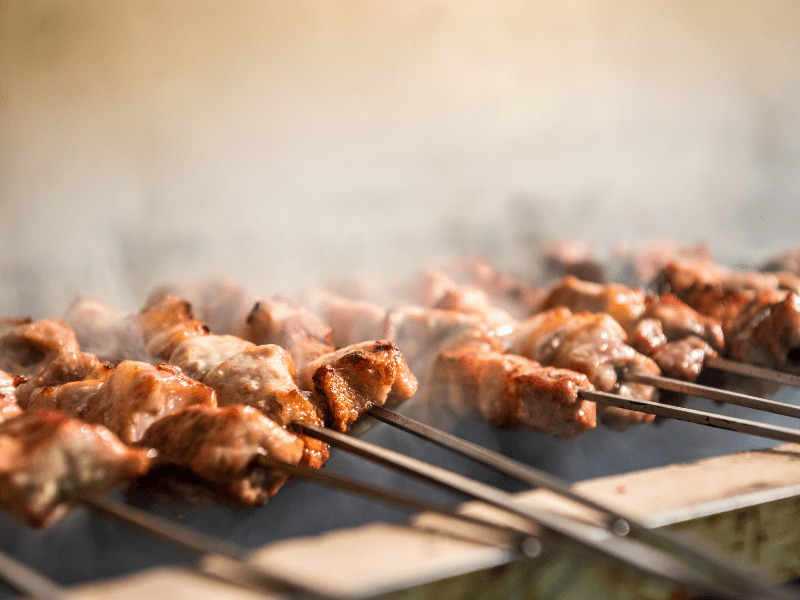 Does the name give it away? Souvlaki is fast food with ancient origins, now served by most street vendors and food trucks in Greece. The skewered kebab-like recipe existed as favorite fast food in ancient Greece, even referenced by Homer.

Excavation in Akrotiri on the island of Santorini also unearthed stone sets of barbecues for skewers used before the 17th century BC.

Typically made from marinated pork spit-roasted on a skewer, restaurants serve Souvlaki with light pitta bread, tomatoes, and Tzatziki. Souvlaki can also be made from lamb or goat meat instead of pork and is popular among the Greeks. So take it to go and enjoy a leisurely lunch in the park overlooking the Acropolis or sit in the local shop and savor a quick bite of traditional Greek cuisine on the go.

Milk and Meat Were Considered Barbaric, and Wine Was Watered Down 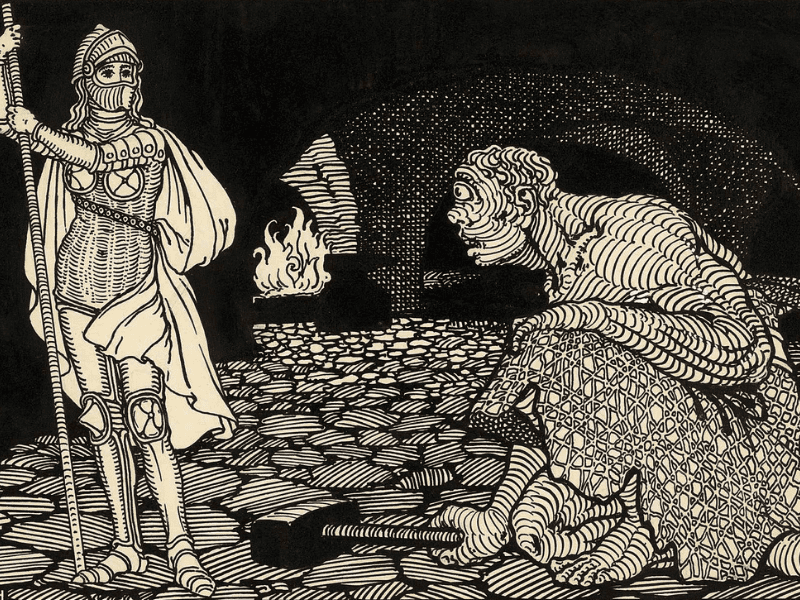 Many of the most popular and famous Greek dishes prominently feature wine, dairy, and meat. Ancient Greeks, however, viewed meat and milk with disdain. Greeks mainly consumed meat at religious festivals when they sacrificed their animals to the gods and then ate the meat following the ceremonies. Although ancient Greeks drank wine, they generally watered it down.

Ancient Greeks also preferred to process milk to make cheese and butter rather than drink it.

In the “Odyssey,” Homer showcases his contempt for drinking milk. He makes his one-eyed monster Cyclops consume milk as a nutritional substitute for eating men. 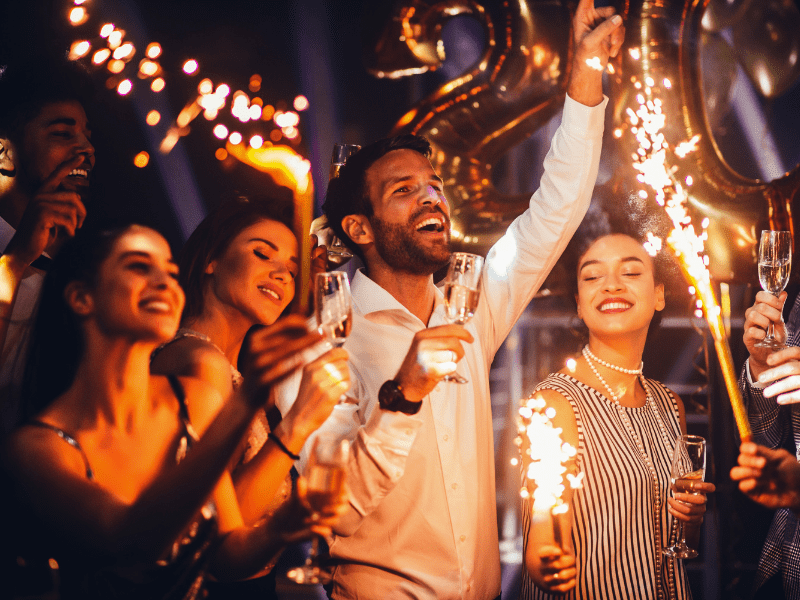 We’ve heard of the Otoshidama tradition of Japan, where grown-ups hand kids are packets of money. In Greece, the practice takes a sweeter turn with cake.

Vasilopita is dedicated to Saint Basil, who collected money and valuables from citizens to conquer a siege. Luckily, the siege never happened, and since St. Basil didn’t know what belonged to whom, he put these valuables inside loaves of bread and distributed them evenly. Miraculously, each valuable found its way to the rightful owner, and this began the tradition of baking sweet cakes filled with money to represent strength, richness, and luck.

Breaking the Ice with Raki 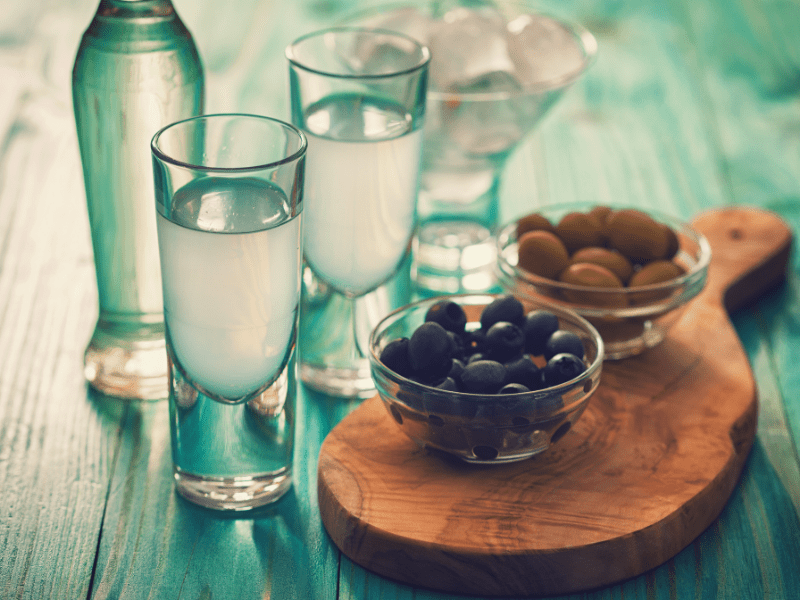 Raki is an alcoholic drink, usually served chilled as a sign of hospitality. Like most things in Greece, this spirit dates back to ancient times, with pottery from the Minoan and Mycenaean civilizations showcasing its use. You’ll find this drink most commonly in Crete but consider it more than merely a warm welcome and a toast. Instead, think of it as the Greek’s way of introducing you to their culture, inviting you to celebrate traditions. In addition, the shots have sentimental value; the first represents appetite, the second asks for health, the third brings joy, and so on.

Don’t be surprised if the restaurant owner joins you for a drink, tells you a few stories, then sends you home with a bottle of homemade Raki. 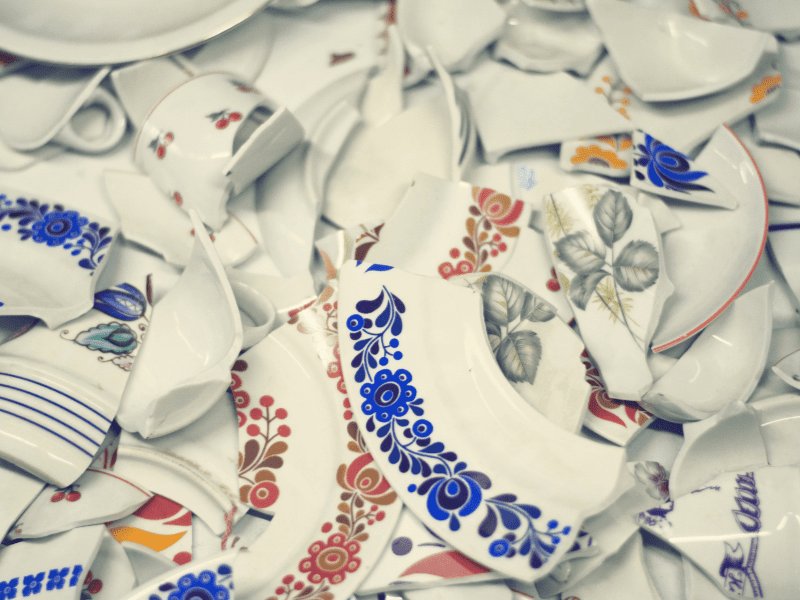 You’re probably aware of the ‘plate smashing’ custom of the Greeks; who hasn’t heard of the Greeks breaking plates and ceramics to celebrate? Traditionally, this breaking of plates is believed to be an expression of sorrow or joy or even warding off evil spirits, but it turns out this common custom is only a myth.

The only restaurants which break plates do so to entertain tourists, and you’ll witness most Greeks actually throw flowers or don’t throw anything at all.

Food Enmity Between Athens and Sparta 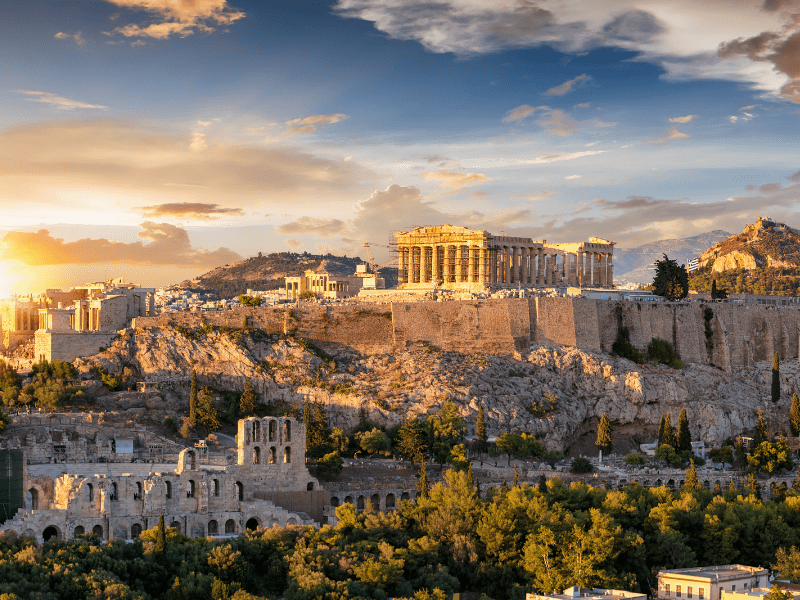 Another common notion is that Athenian food differed and still differs from ancient Spartan and contemporary Greek states. Tourists claim they still taste a distinct difference in the food. The truth is the food in these two city-states was nearly identical, but Athen’s had higher quality products. Sparta and Athens were strong rivals, explaining the food variations as these two may not have willingly shared produce. The truth is, Sparta’s food was simply lower quality.

Greek cuisine is pretty light to consume, which is why you’ll notice everyone goes in for several helpings. However, you might offend the host if you reject their offer for more food or extra helpings. On the other hand, Greeks are very hospitable, which is why they’ll keep filling your plate. So go on and eat to your heart’s content. After all, how often do you get to experience traditional Greek cuisine in Greece?

Boutique Travel Advisors is a full-service, luxury travel agency. We specialize in creating bespoke itineraries for discerning clients around the world. Please visit our website or call 480-787-1477 to speak with a dedicated travel expert.

Planning an international or domestic trip? Check out our other articles to help you come prepared.