France may be best known for art, high fashion, romance, and beauty but there is no doubt that the country is also brimming with history and rich, fascinating stories of bygone days. From enchanting castles and fortifications of the middle ages to the breathtaking Baroque palace of the doomed Marie Antoinette, Versailles, tour guides stroll the streets of French cities and towns, captivating travelers with fantastic tales. It is no wonder that France remains one of the best places to travel in Europe.

Whether you are interested in exploring renaissance art, learning about the tragedies of the French Revolution, or diving deep into the history of two World Wars, France has something for everyone. But for true history buffs, nothing compares to spending a night reliving history. So while there are dozens of magnificent, luxurious hotel properties, here is our list of the 10 best hotels in France for history lovers. 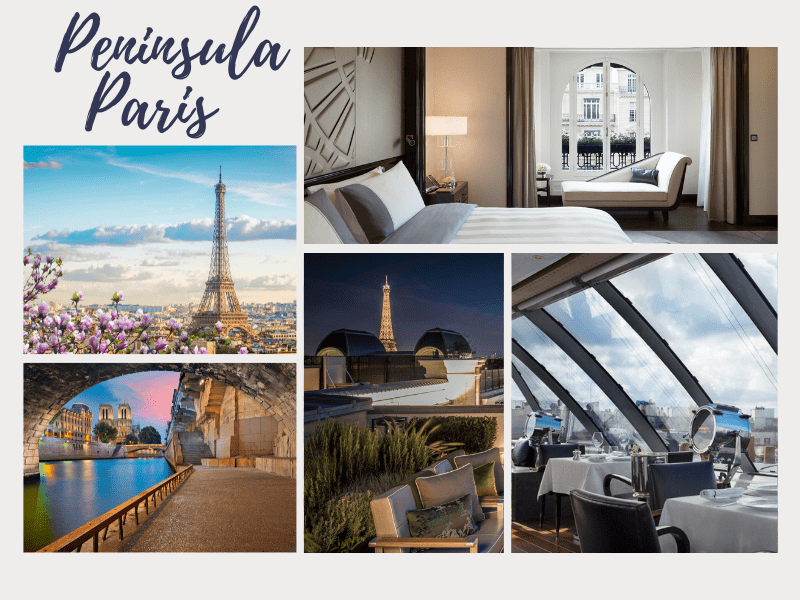 Situated right in the heart of the City of Light, today Peninsula Paris is an oasis unlike any other. Located on 19th Avenue Kléber, the hotel’s history dates back to 1864. At that time, Russian ruler Count Basilewsky built a castle on this site, inspired by his beloved Palace of Versailles. After selling the palace it became the home of the deposed Queen Isabella II of Spain, who spent many years plotting and conspiring at this address.

Following her death, a bidding war ensued between hotel magnate Leonard Tauber, the US Government, and the King of Belgium. Tauber won and constructed the luxurious Hotel Majestic on the site. For sentimental purposes, he kept Queen Isabella’s marble bath and placed it in the Presidential Suite.

During the subsequent decades, the hotel served as a hospital, the host of the “soiree of the century” attended by James Joyce, Pablo Picasso, and Igor Stravinsky, the home of George Gershwin, the headquarters of Nazi High Command during WWII, and headquarters of UNESCO. After years of turmoil and upheaval, the property was restored to its glorious past following 3 years and a $575 million investment by Peninsula Hotels.

Today, the Peninsula is one of the best luxury hotels in Europe. Surrounded by chic Parisian architecture and design, Peninsula Paris is the perfect location for a getaway. 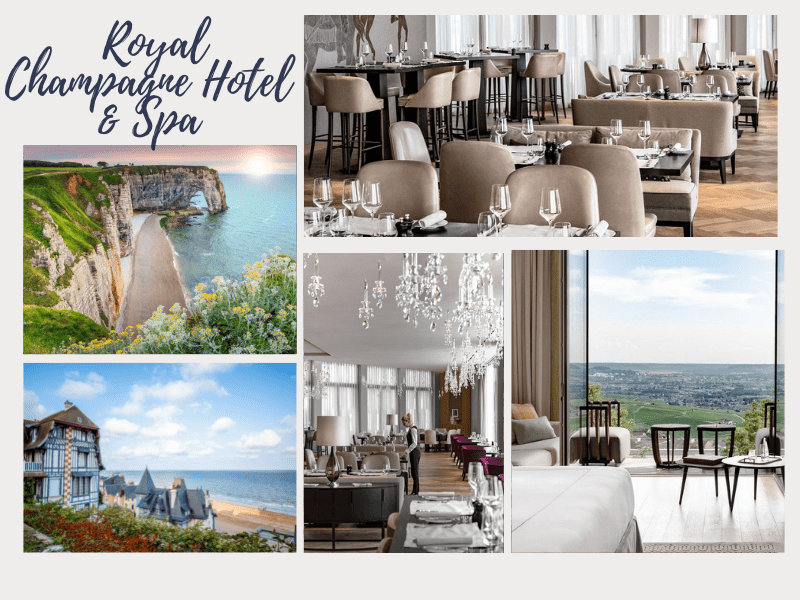 Winning the 2020 Reader’s Choice Award for Top Europe Resort by Condé Nast Traveler, this exquisite luxury Hotel and Spa overlooks the vineyards of the Champagne region. The architecture is superb and even incorporates the original 19th Century Post House.

Rumor has it that King Charles X stopped at this very Post House before his coronation. From  September through March, the hotel celebrates everything from fall festivals, to the magic of Christmas, to the arrival of New Year’s and all the special moments in between. 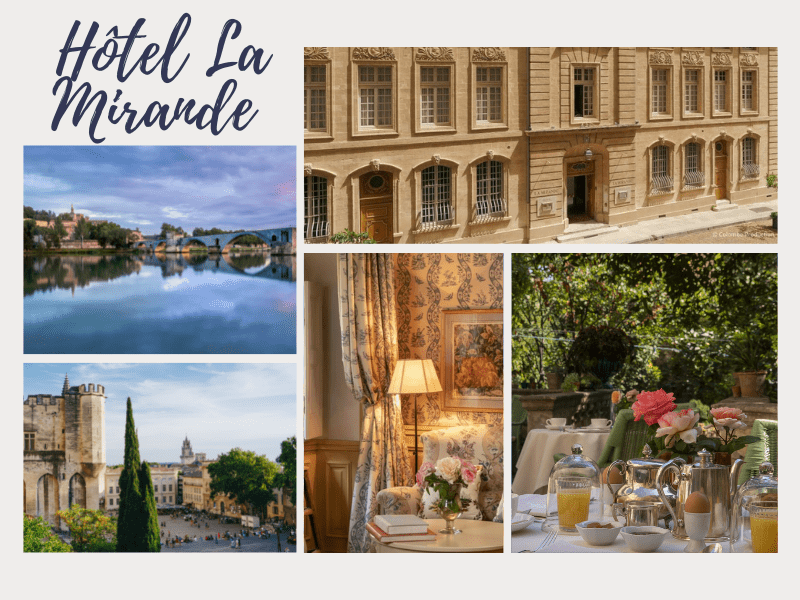 Avignon is famous for harboring Popes who fled the corruption of Rome in the 14th century. The Pope’s Palace, ‘Le Palais des Papes,’  is the largest gothic house in Europe. If you’ve ever wanted to experience time travel, the 5-star luxury Hotel La Mirande takes you back through centuries of French history, décor, and design. Named after a famous room in the Pope’s Palace, this historic French hotel is situated in the Province of Avignon. Its unique location offers guests views of the Pope’s Palace from nearly every room.

The décor and style of the hotel bring in both 18th-century and 19th-century art and fashion and create unison between the two. There is no doubt that the Hôtel La Mirande is one of the best hotels in France, especially for history lovers. 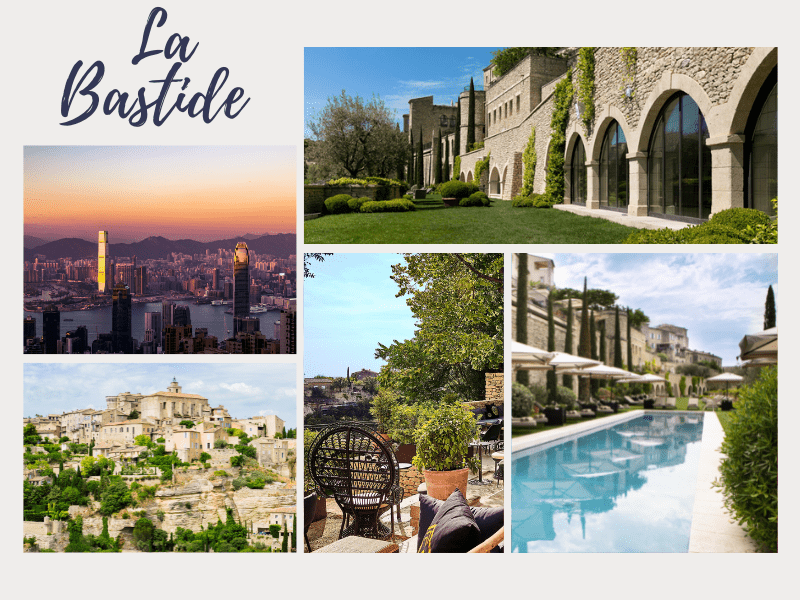 La Bastide overlooks the charming and historic village of Gordes. The town is widely recognized as one of the most beautiful villages in France and all of Europe. This luxury hotel offers guests rooms, suites, and villas to accommodate varying needs and budgets. La Bastide is set in a 12th-century castle and finds any chance it can to envelop visitors in its illustrious past.

This hotel is perfect for families who have access to the Children’s Kingdom. This designated area offers families an opportunity to swim together, play arcade games, and enjoy snacks on the terrace. The region is a great addition to any Europe summer travel itinerary. The hotel even caters to weddings and private events. Onsite activities include stargazing, yoga, outdoor adventures, and music events. 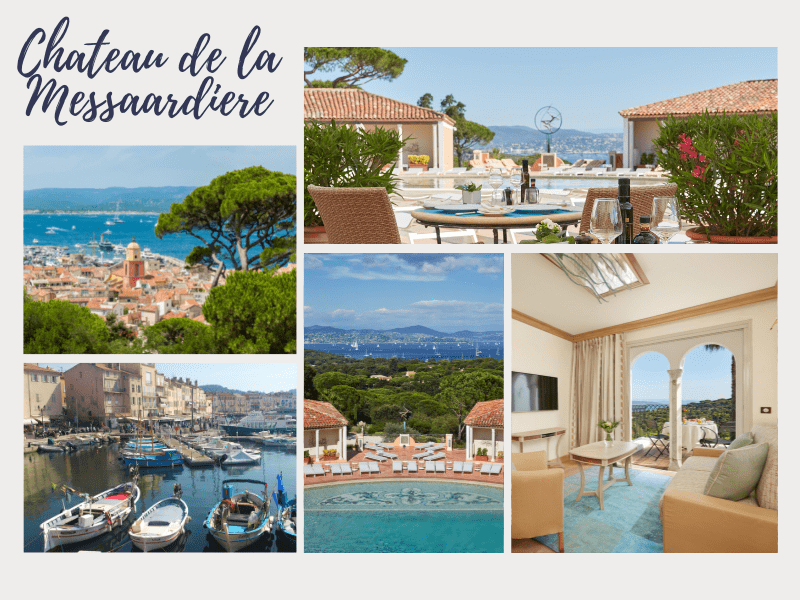 The South of France is a getaway on most people’s list of travel plans, and San Tropez is a mecca for luxury travelers, celebrities, and honeymooners. Hugging the Mediterranean Sea, Chateau de la Messardiere is a 5-star hotel designed for pampering and relaxation. But the hotel is not simply glitz and glamour.

The history of this hotel is as fascinating as the region it inhabits. The name Messardière dates back to the reign of Charles Martel, the grandfather of none other than the iconic ruler, Charlemagne. The chateau was built in 1904 and given as a wedding gift to a young officer, Henry Brisson de la Messardière, and his beautiful artist wife, Louise Dupuy Angeac.

Now, this luxury hotel is considered not only one of the best hotels in France but also one of the best places to travel in europe. It offers a perfect getaway for groups, families, and couples. 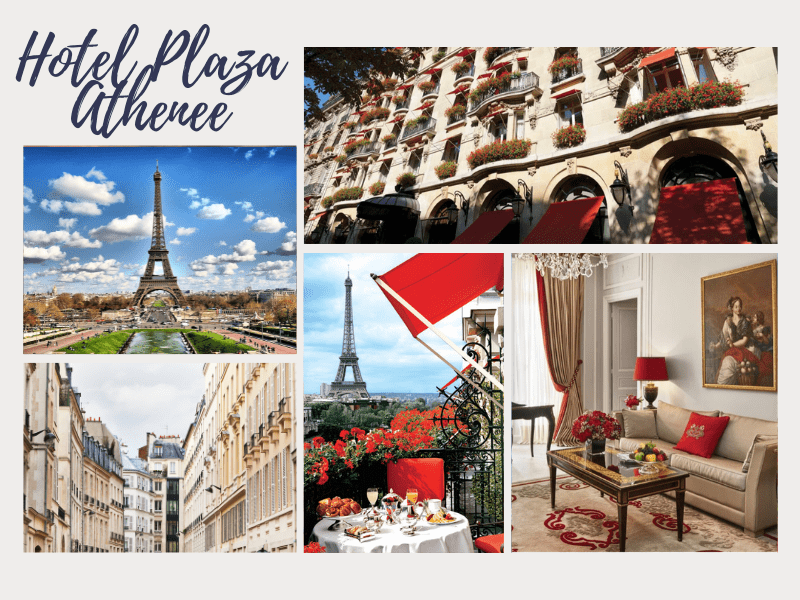 Paris remains the heart of France, and no list of the best luxury hotels in France would be complete with the Hotel Plaza Athenee. This luxury hotel sits on Avenue Montaigne, the fashion Mecca of Paris. Its neighbors boast some of France’s most significant designer flagship stores, including Dior, Versace, and Gucci. Opening in April 1913, Hotel Plaza Athenee quickly became the ‘It’ place for composers and artists of the era.

Following many years of new management and renovations, in 2012, the hotel received the official distinction of Palace Status. The Plaza Athenee is arguable the best hotel in Paris if you want to see and be seen and one of the best places to travel in Europe. However, don’t be fooled by the hotel’s glamourous style. Children and fur babies alike are not only welcomed but pampered and spoiled. 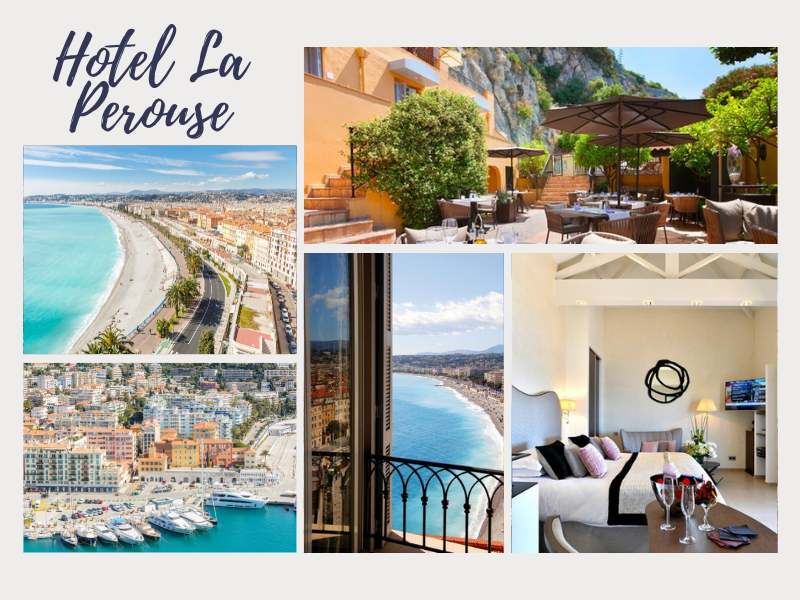 Overlooking the gorgeous Bay of Angels, Hotel La Perouse has water views that will transport you to the most tranquil of places. The hotel possesses a unique location, nestled on Castle Hill, at the end of the promenade des Anglais. It is just a short walk from the market of the Cours Saleya in the historic area of Nice.

Guests have the best of all worlds with private beach entrances, luxury rooftop terraces overlooking the sea for breakfast or dinner, and access to the sauna and heated pool perfect for lounging and suntanning. Not only is La Perouse one of the best hotels in Nice but perhaps in all the French Riviera. 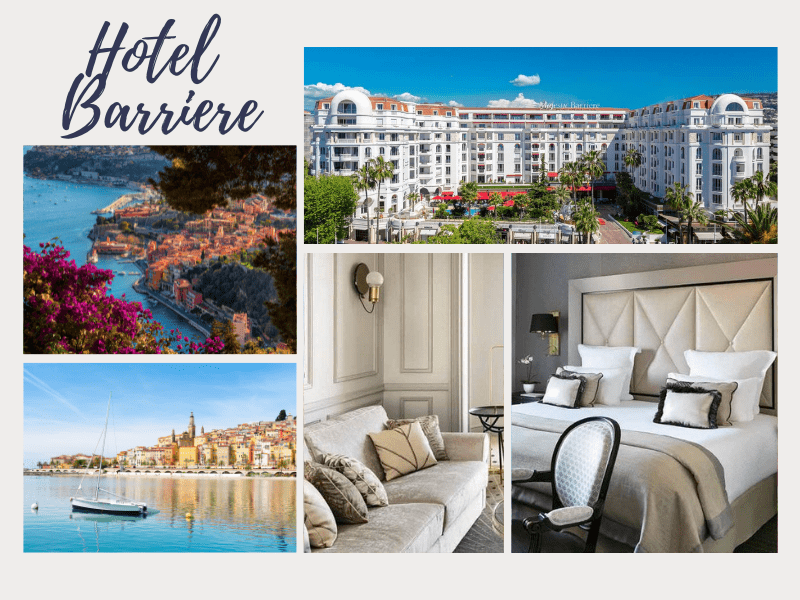 If you’re considering Europe summer travel few places are as exciting and romantic as Cannes. Built during the Roaring ’20s in Art deco style, this award-winning luxury hotel sits close to the most glamorous event location in all the world, the Cannes Film Festival. Not only do visitors come for the events, but they stay for the gorgeous views and fun activities. In addition, guests have beach access to the Mediterranean Sea below while staying at one of the best hotels in Cannes.

In addition, we can also help you plan the perfect outing. Take in the views of the coastline from a private yacht, enjoy a scuba excursion to the Cannes Underwater Eco-Museum, try your hand at a pottery workshop, or enjoy a trip through the nearby vineyards. 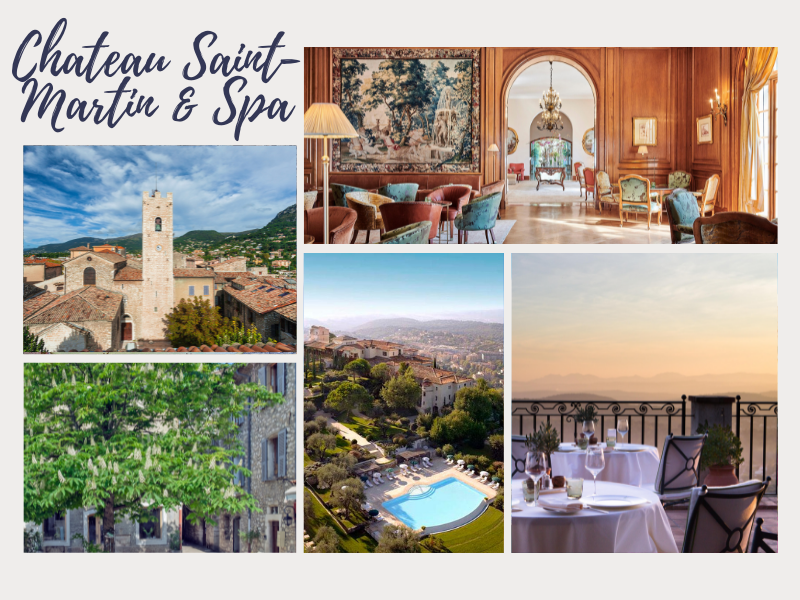 This hotel was once a fortified Roman structure and a 12th Century Knight Commandery. The imposing structure built as a castle on a hilltop overlooks Saint Paul de Vence’s medieval walled city below the hotel.

Guests interested in onsite epicurean adventures will find the Chateau Saint-Martin to be one of the luxury hotels in Europe. Experience the exquisite Michelin star restaurant that provides guests with delectable cuisine. Take in the views of the countryside and the Mediterranean Sea below while sipping champagne. In addition, you have 34 acres of trails and olive tree groves to explore, tennis courts and golf courses to play on, and pools and ocean entrances to enjoy. 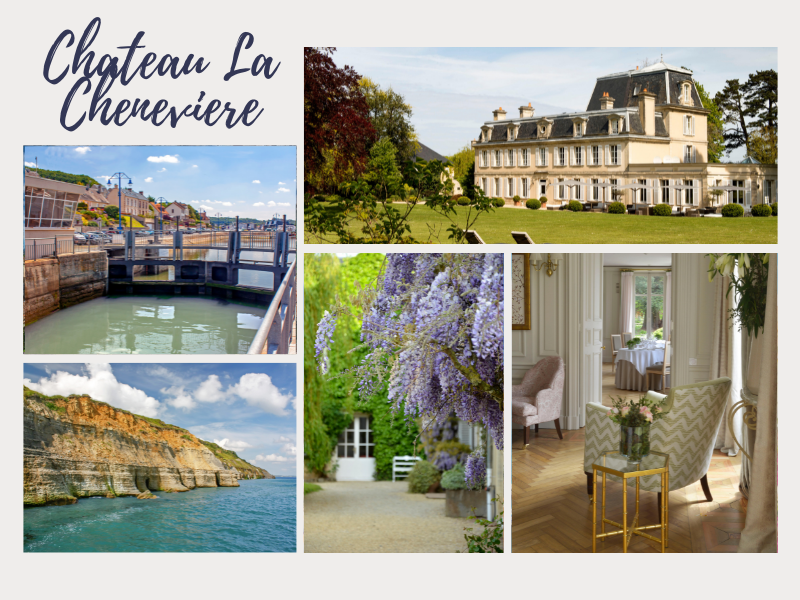 Although the Chateau La Cheneviere is a massive estate, it feels more like a cozy tucked-away country home than a grand palace. While today the chateau is one of France’s most beautiful luxury hotels, it has a long history and deep ties to the community. The gracious gardens surrounding the estate served an essential purpose in the 17th century. They were used for hemp cultivation to make rope and clothing for local fishermen.

During the Second World War, the Germans occupied the property, housing both Third Reich soldiers and officers. But in 1944, Armand Lapierre, a member of the French Resistance, participated in the “Grande Coupure” on the chateau’s property. The event aimed to decimate German communication lines around La Cheneviere. After D-Day, the Royal Army took over the property and utilized it as a strategic center to fight against the Nazis.

Eventually, Marie Francoise and Thomas Dicker purchased the chateau. They converted it into one of the most prestigious historic hotels in Europe, paying homage to its storied past. Today, guests can enjoy the many amenities provided by the hotel, including a heated outdoor pool, apiary, tennis courts, and lovely grounds. First, sip a French 44 or local vintage at the bar while the bartender regales you with stories of bygone days. Then, enjoy exquisite gastronomic cuisine with ingredients procured from the home’s vegetable gardens.

Whichever one of these most beautiful historic hotels in France you choose to visit, take a moment to soak in the ambiance and appreciate the heritage.

BTA is a full-service luxury travel agency based in Scottsdale, AZ. To learn about securing exclusive amenities at our hotel partners or for assistance planning your next trip to Italy or another desirable destination, please get in touch with Boutique Travel Advisors.

About the Author: BTA WORLD CORRESPONDENT