The South Pole. The end of the earth. Frozen and inaccessible. Trip of a lifetime. It took more than 400 years of risky expeditions before explorers verifiably reached the south pole. Ernest Shackleton, Robert Scott. Roald Amundsen, Richard Byrd were among the many expedition leaders to make an attempt. Dozens of expeditions failed and countless explorers died.

Tourists began traveling to Antarctica in the late 1950s according to IAATO (International Association of Antarctic Tour Operators), though there are records of tourists going to the South Shetland Islands in the 1920s on mail ships that served the whaling stations. Last year, IAATO recorded nearly 45,000 people boarding cruises to Antarctica with 37,608 setting foot on the continent (the remainder did cruise-only trips)—a 50% increase from 10 years ago.

With Antarctica appearing on more top destination lists, the golden age of Antarctica tourism has clearly begun. There are more types of cruises and options, including fly-cruise hybrids. If Antarctica is on your bucket list, now is the time to go. 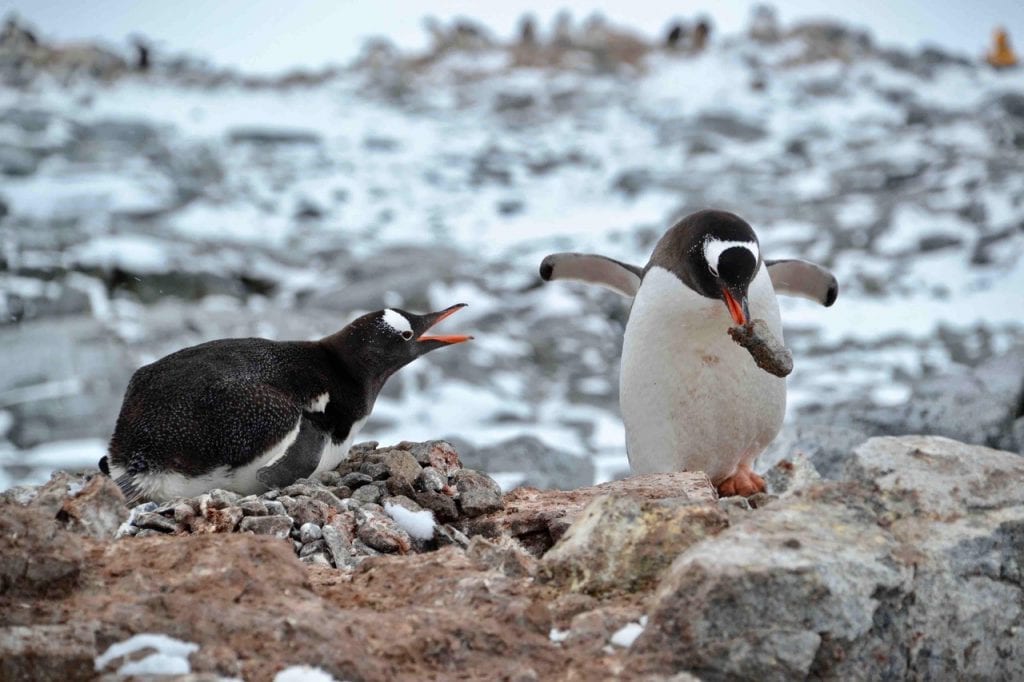 The seas were calm with a light wind as we transferred from the zodiac to our kayaks for our first ever kayak trip in Antarctica near Barrientos and Cecilia Islands in the Southern Atlantic Ocean. While in the zodiac, our expedition leader, reminded us that we should keep 300 meters from glaciers, 100 meters from whales and not to touch any penguins. I was excited and a bit nervous.

I slid off the zodiac into my kayak with my partner Jeanine. We began to paddle and get a feel for the kayak, the water, our teamwork. Suddenly someone shouted and pointed. We saw the spout of a whale. Wait. There were TWO humpback whales. And, they were just 10 meters away. We were close enough to hear the spout and feel the ripples in the water made by the majestic mammals.  The experience of those first few minutes were exceeded each and every time we went out. One day, a curious Minke whale slowly circled us while we held our breaths waiting to see where it would surface again. Another day, the seals were in view.

And the penguins, well, we were in their living room. They were everywhere. Right next to us—under the water, over the water, swimming, diving, splashing, jumping on and off icebergs, hoping unto the land. It was as if we were at a playdate. This was one of the most exquisite experience of kayaking in Antarctica—being intimately connected to the water and the life of the sea. We had amazing views of the penguin colonies from the sea. We saw Gentoo, Chinstrap, and Adelie, often staring at the water, deciding whether it was safe to enter. Sometimes they stood for 20 minutes, at the water’s edge, seeming to talk amongst themselves before deciding to take the plunge.

We paddled in the snow (a first for me), brash ice, in the wind, in waves and in stillness. We saw a Glacier calve in a distance. The sound was thundering. We were awestruck by the size and beauty of the glaciers. Being in the water with them was a humbling experience.

We saw Elephant seals lying on an island going through catastrophic moult. Wendell seals greeted us in Mikkelsen Harbour and a crabeater seal lounged on a small iceberg near Danco Island. Penguins tried to get on the iceberg before noticing the seal and quickly departing.

One highlight was launching our kayaks onto fast ice. Fast ice is ocean water that has frozen and extends out from the land.  It wasn amazing experience to sit, and later stand, on the fast ice.

After each kayaking adventure, we had about 45 minutes to spend on land. Since it was late December/Early January, many chicks were already hatched. The Adelie chicks hatch first, so they were the largest. Penguin couples take turns caring for their chicks—one sits on eggs or shelters the chick while the other goes to sea to forage. They are loud—constantly squawking. They also like to steal rocks from each other’s nests and many fights ensued. I enjoyed watching these interactions. One island had a penguin colony of 100,000 mating pairs. There were penguins high up on the mountains and constant movement of penguins up and down the slopes.

The views from the ship were also spectacular. Touring cliffs. Huge Glaciers. Seabirds. The majesty of Antarctica in view all of the time. I was looking forward to going through the Lemaire Channel, one of the most scenic channels in the world. It is shown in all the tourist brochures and websites. The Channel is a seven mile stretch of water that is only half a mile wide at its narrowest point. I stood outside next to the bridge as we approached the opening of the Channel. The snow was coming down steadily. The thermometer read 0 degrees Celsius and the wild was blowing. The ship traveled slowly–only 5-7 knots. Visibility from the bow of the ship was about 100 meters—enough to see a series of icebergs spaced throughout the Lemaire Channel. It seemed unlikely that we would be traversing the channel. I looked inside the Bridge where the Captain was in intense conversation with his officers. The ship slowed down and almost stopped. I felt it moving to the right (starboard if you’re a sailor). The ship turned around—conceding to the strength of the Antarctica weather and glaciers. So it goes on an Antarctic trip. Always be ready to change plans. Another adventure awaits rights around the corner. 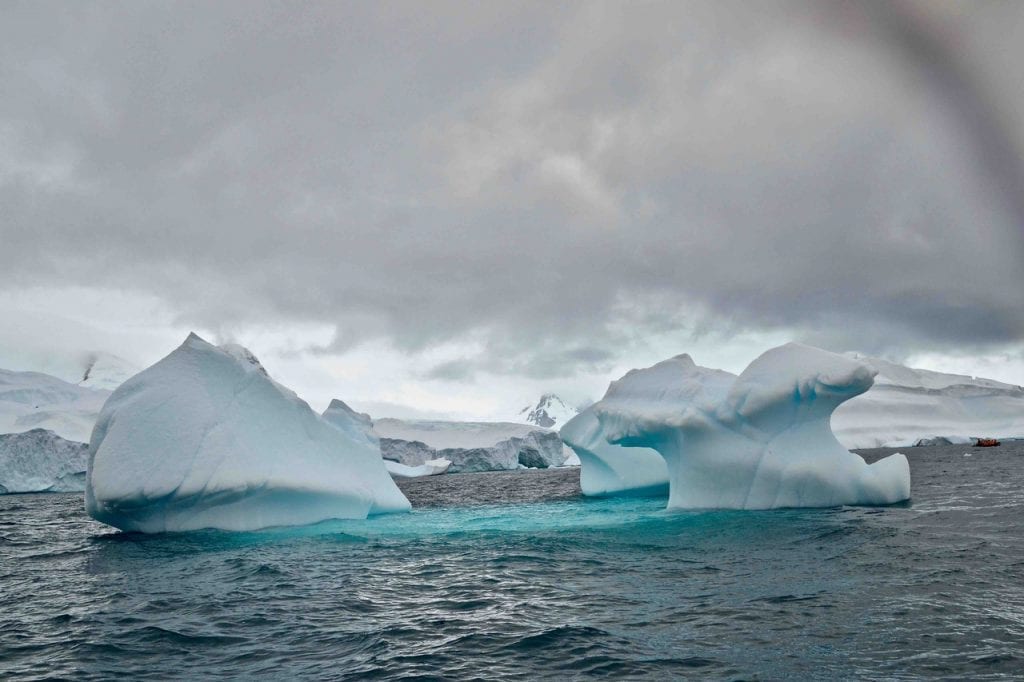 On My Own—My First Solo Adventure

Antarctica was my first solo adventure and I was nervous. I was worried about eating alone, not having friends, being lonely, being seasick. All my fears went away as I waited for the charter flight in Buenos Aires for the trip to Ushuaia. Everyone was introducing themselves and excitedly discussing the trip. Onboard the ship, there were many people traveling solo and I found most people to be very friendly and willing to talk and meet new people. There were people of every age from teenagers to travelers in their 70/80s. Since there were only 16 kayakers, we also had a shared experience which created bonds and new friendships.  I had a single cabin but many of the solo travelers booked shared cabins and made friends with their cabin-mate.

The Drake Passage (2 days down and 2 days back) is notoriously turbulent. Many people worry about it. We were fortunate to have the “Drake Lake” in both directions. I thought that I would be relaxing during the passage, but there were nonstop lectures and briefings during these days. There was also time for massages, spa treatments, yoga (yes, I did do yoga during the crossing), hanging out with new found friends, playing games or reading a book. Most people brought medications to combat seasickness and there was a doctor on board who was a helpful resource.

The Antarctic tourism season is from November to early March, with the holidays being the height of the season. Penguin chicks start hatching in late December, so if seeing chicks in important, you’ll want to go early around that time. On the other hand, it’s also the most crowded and you’ll need to make sure to book early to get adventure options like kayaking and camping. March weather can be changeable. If you’re worried about the Drake Passage, that might not be the best time to go.

January is summertime in South America. Buenos Aires was 90 degrees Fahrenheit (32 degrees Celsius), Ushuaia was 50 degrees (10 Celsius) and Antarctica was mainly around 30 degrees (0 Celsius). Antarctica weather is very changeable. We had snow and wind at various times. The itinerary changes based on the weather—don’t get too attached to any one island or location. For instance, it was snowing with very low visibility when we approached the entrance to the Lemaire Channel and it was not passable due to being blocked by icebergs. We ended up having a marvelous adventure at Jougla Point instead. 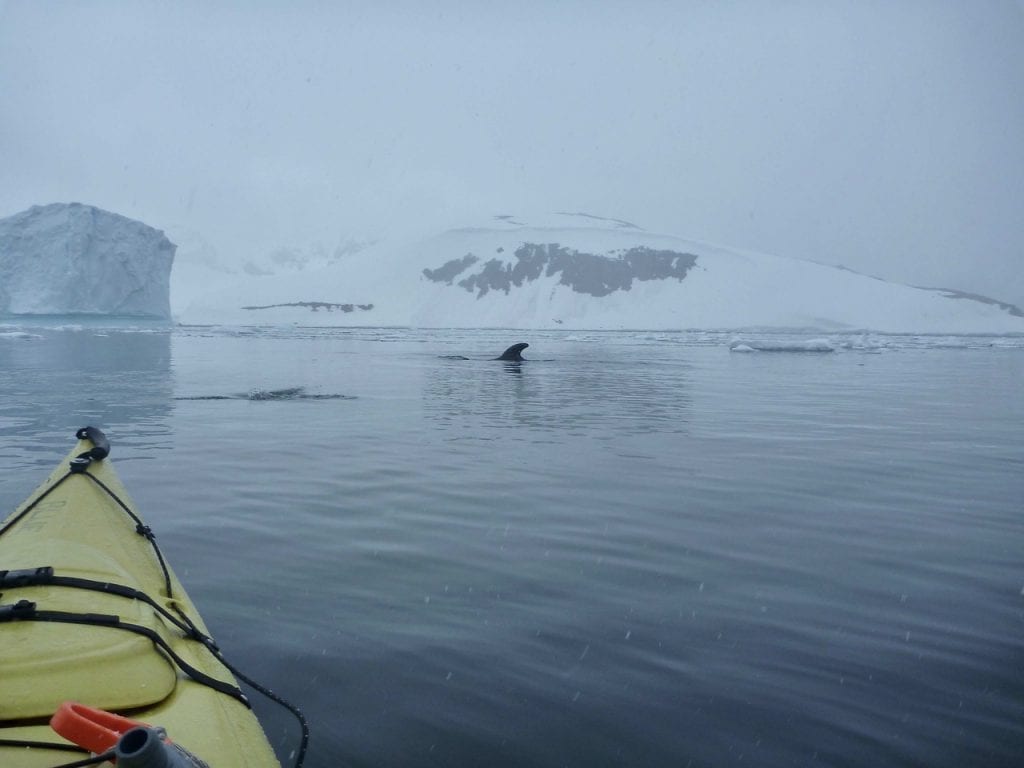 Kayaking in Antarctica-Things I wish I knew before I went

Kayaking in Antarctica is a very intimate experience with the ocean and the sea life. You’ll be paddling with the penguins, whales, seal and icebergs. You need to have had some kayaking experience and the pre-expedition instructions say that you must be able to do a wet exit. We had varying levels of experience in our group. On my trip, the kayakers were the first off the ship and often the last to return. We generally paddled for 90 minutes and were on land for about 45-60 minutes. There were one and two-person kayaks. The two-person kayaks were very stable.

Most ships have a limited number of kayaking spots available. These slots sell out quickly. If kayaking is a must-do for you, you’ll want to book 10-12 months in advance to guarantee your spot. There are some trips called base camp trips where there are more opportunities to kayak. The base camp trips spend more time in an area and offer many more adventure opportunities.

BTA is a great resource for expedition cruises and active travel to Antarctica, similar to the trip enjoyed by Sue.

About the Author: BTA WORLD CORRESPONDENT