What happens in Vegas stays in Vegas, unless we’re talking food. It is nearly impossible not to rave about the area’s culinary scene. Here are some to try during your next stop in Sin City:

Legendary chef Joël Robuchon held 32 Michelin stars in his lifetime, more than any chef in history. And though the world lost him last year, Joël Robuchon Restaurant – open for dinner in the MGM Grand – lives on. Lavish in every way imaginable, the design and décor are meant to transport guests to 1930s Paris, while the food is meant to transport guests to heaven on Earth. To give an idea, the tasting menu currently features Oscetra caviar served in a crustacean gelée dotted with cauliflower puree, delicate flan of sea urchin on potato puree topped with Arabica coffee foam and a John Dory fish fillet with tempura of shiso leaf on delicate squid ink risotto. www.joelrobuchonusa.com

Located in the Bellagio, this dinner-only French restaurant is legendary. With both one Michelin Star and an AAA Five-Diamond rating, expect a bucket-list tasting menu here with dishes including sautéed foie gras with wild strawberry fragoli compote, roasted Brittany langoustine with caviar and beurre blanc and A-5 grade wagyu ribeye with bordelaise sauce. There is also a compressed menu for those who have show tickets as well as a vegetarian option available. For an added charge, there are specially paired wines available for each course that have been lauded by Wine Spectator several times over. www.lecirque.com 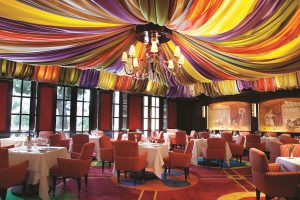 This trattoria-style Italian restaurant in the Four Seasons Las Vegas and open for breakfast, lunch and dinner daily specializes in handmade pasta, wood-fired pizza and refined desserts. As the weather cools, the terrace will beckon guests to enjoy al fresco dining at its best. Among the many highlights on the menu this fall is the calamarata pasta, which is cooked in a jar and topped with lobster, calamari, shrimp, tomatoes, artichokes, as well as the pansotti di zucca, which is pasta stuffed with roasted butternut squash, aged asiago, brown butter, sage and walnuts.  Insider tip: book the formal weekend afternoon tea (and optional champagne tea).www.fourseasons.com

As Delmonico owner and chef Emeril Lagasse would say, “Bam!” The James Beard Award-winner and culinary icon is celebrating the 20th anniversary of this classic steakhouse with Creole influences, which is located in The Venetian Las Vegas and open for dinner nightly. Named to honor 100-plus-year-old Delmonico restaurant in New Orleans, the menu’s eye popping selections include USDA in-house, dry-aged, certified Japanese wagyu and Piedmontese steaks as well as classic seafood dishes. And while the wine list is fantastic – a Wine Spectator honoree since 2004 – consider spirits here as the bar boasts more than 700 selections of whiskey and two dozen impressive signature cocktails. www.emerilsrestaurants.com

Also celebrating its 20th anniversary, Aureole is Mandalay Bay’s award-winning dinner restaurant and known for its progressive American cuisine as well as its celebrated chef, Charlie Palmer. Inducted into the James Beard Foundation’s Who’s Who of Food & Beverage in America in 1998, Palmer has held one Michelin star since 2007 and is a past chair of The Culinary Institute of America’s Board of Trustees. His menu at Aureole offers both a tasting option as well as a la carte choices including Ora king salmon with smoked cream, asparagus risotto and Colorado lamb with stuffed campari tomatoes. The venue also takes great pride in its craft beer selection and has 3,000 total wine selections, including their own Aureole Cuveé. www.charliepalmer.com 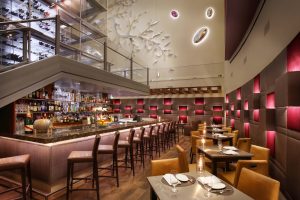 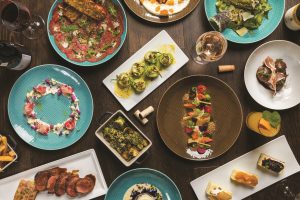 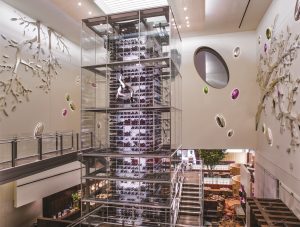 Sparrow + Wolf, which is located in Las Vegas’ Chinatown neighborhood and open for dinner nightly, has been making news worldwide for its modern global fare, which balances classic and cutting-edge techniques and takes its inspiration from the culturally diverse neighborhoods that its celebrated chef Brian Howard has visited in his extensive travels. Most of the dishes on the menu, notably the ocean parfait with Santa Barbara sea urchin, smoked trout roe, kizami wasabi and toasted nori and the duck confit and sweet potato dumplings, are meant to be shared and paired with wine, beer and cocktails. They also offer a clever take on a bento box with a three-tier selection of premium oysters, shellfish, cured meats, terrines and cheeses. www.sparrowandwolflv.com 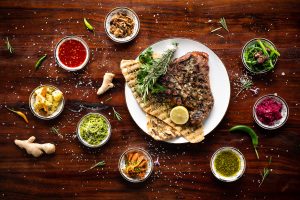 Serving dinner Thursday through Sunday and located in The NoMad Hotel at newly opened Park MGM, NoMad Restaurant is inspired by the Royal Portuguese Cabinet of Reading in Rio de Janeiro, a soaring library and cultural icon in Brazil. As such, its 23-foot walls have floor-to-ceiling bookshelves and are home to 25,000 books. Beyond the books, there are sexy rose red leather banquets, glittering chandeliers and a fireplace imported from France in the dining room. The food is as good as the views with Grande Plateaus of Fruits de Mer, seasonal pastas, black truffle-laced roast chicken and Baked Alaska flambéed tableside, among other notable menu standouts. www.thenomadhotel.com 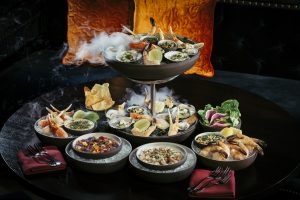 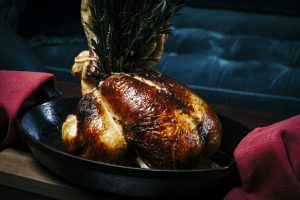 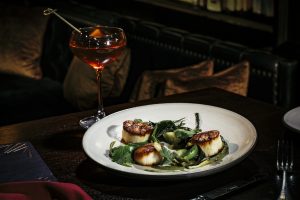 Located in the Aria Resort & Casino and open for dinner nightly, Carbone is meant to be a love letter to the great Italian-American fine dining establishments of mid-century New York. It is the sister location to the New York restaurant of the same name, which gained international attention with it received a five out of five stars fromTime Out New York, four and a half stars from Bloomberg, three stars from The New York Time and one Michelin star every year since 2014. Both locales are known for sourcing the finest ingredients from across the globe, sparing no expense to develop the menu’s familiar-sounding dishes into extravagant experiences. www.aria.com 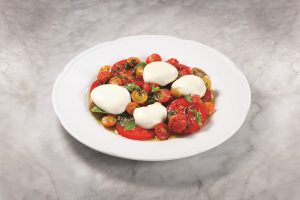 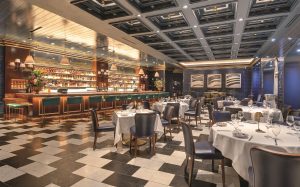 Legendary chef Joël Robuchon held 32 Michelin stars in his lifetime, more than any chef in history. And though the world lost him in 2018, L’Atelier de Joël Robuchon – open for dinner in the MGM Grand – lives on. L’Atelier is French for workshop, and that is exactly how the team treats it: as a culinary workshop to tinker with ingredients and flavors. Each dish is prepared in an open kitchen to enable guests to see all of the action. There are multiple tasting menus, most three or four courses with intermittent surprises treats in between. Dishes run the gamut from veal sweetbreads and Kushi oysters to caramelized quail and seared Dover sole.www.mgmgrand.com

Located in the Four Seasons Hotel Las Vegas, this elegant dinner restaurant was designed with comfort in mind.  The dining room’s grand arches, meant to remind one of a high-end Spanish home, welcomes visitors without overpowering the eye, while deep couches and over-stuffed chairs to make guests feel right at home. The menu is a combination of raw bar delicacies, seafood, shellfish and impressive cuts of meat, including A5 wagyu beef from Kagoshima, Japan. Unique to the venue, among its long-time bestsellers is a two-pound, Ritz Cracker-stuffed Maine lobster. Yes, really! A bonus: there’s a specialty menu for vegetarian and vegan guests as well.www.charliepalmersteak.com

Chef Alain Ducasse, known as the first chef to own restaurants carrying three Michelin Stars in three cities, founded this stunner, which is open for dinner in the Delano Las Vegas. And while the décor is purposefully laid back and relaxed – think maritime blues and breezy whites throughout – the menu is anything but casually prepared and presented. The dishes have French, English and Italian nods, yet with seasonal west coast ingredients. The menu, teeming with flavor and truly clever pairings of things like English pea velouté with quail eggs and sea bass with oranges, lemon, grapefruit, is designed to transport one to the French Riviera without leaving the Strip. www.delanolasvegas.com

Offering what it refers to as French flair without all of the formality, this stylish dinner restaurant located inside Park MGM, Bavette’s aims to seamlessly blend fine dining with frivolity and fun. Visually, a combination of vintage art and art-deco mirrors adorn the walls while velvet chairs practically scream out for you to sit down. Chandeliers light the space just enough to read the menu.  And what a menu. Fresh oysters are offered from both coasts along with double bone Berkshire pork chops, decadent truffle mac’n’cheese and a seafood platter that towers over guests with Maine lobster and King crab from on high. www.bavettessteakhouse.com 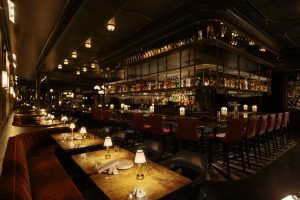 Known for what he calls his “New New Orleans” style of cooking, which is a twist on Louisiana’s classic Creole dishes, chef Emeril Lagasse’s namesake fish house located in the MGM Grand definitely – as Lagasse would say – kicks everything up a notch. Expect market fresh fish and shellfish creations at both lunch and dinner alongside flavorful steaks and brilliant pork and chicken dishes, all paired with Wine Spectator magazine “Best of Award of Excellence” options, beer and craft cocktails. And thanks to the imaginative sea-inspired design throughout the interior by New York’s acclaimed Rockwell Group, the restaurant makes you feel closer to the sea than the Strip. www.emerilsrestaurants.com

A true jewel in the Palazzo Las Vegas’ crown and open for breakfast, brunch, lunch and dinner, Morels Steakhouse & Bistro was thoughtfully designed with warm woods and cool blue walls and is adorned with provocative art from Tom Cannon. The wine menu features over 60 options by the glass, 450 varietals by the bottle and a wine system that allows guests to sip two-, five-, or eight-ounce pours. Menu spotlights include crepes, 18-hour braised short rib, both Iowa corn-fed and Kansas grass-fed steaks aged 28 days and a Prime option aged 35 days. Also, don’t miss the fromage menu with 60 cheeses from around the world. www.morelslv.com

Located off the strip on Lake Las Vegas, Americana Las Vegas – open for lunch, dinner and Sunday branch – is an upscale, lakeside dining restaurant that offers American cuisine blended with European influences. Drawing inspiration from his Italian grandmothers who spent a lot of time in the kitchen, owner and executive chef Stephen Blandin, who graduated from the Culinary Institute of America in Hyde Park and worked under Charlie Palmer, has mastered the art of creating fresh and flavorful dishes to create a memorable experience for guests. A best bet is opting for one of his specialty tasting menus – including a vegan option – featuring five seasonally inspired courses. www.americanalasvegas.com

This French- and Spanish-inspired dinner restaurant tucked into the Bellagio Hotel and Casino is headed by two-time James Beard Foundation Award winner Julian Serrano, who is known for dreaming up dishes that are as much works of art as the Picasso’s that hang on virtually every one of the restaurant’s walls. The menu features three options: a pre-theatre, three-course tasting menu and a six-course traditional chef’s tasting menu (which can be modified for vegetarians as needed). The chef’s tasting menu starts with a tapas-style offering based on seasonality. It always features several main entrees from which to choose and a fois gras “steak,” as well. Caviar and wine pairings are available for an additional cost. www.bellagio.com 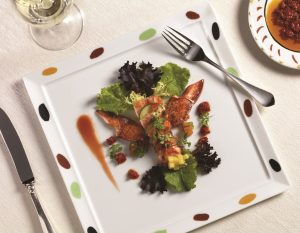 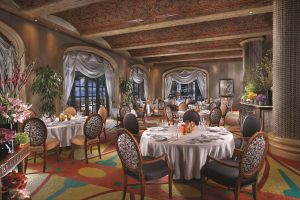 About the Author: Alison Bailin Batz